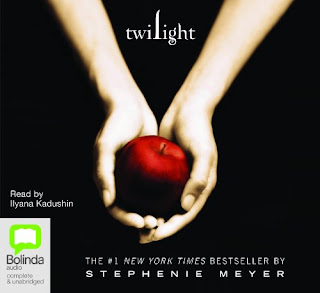 “When Isabella Swan moves to the gloomy town of Forks and meets the mysterious, alluring Edward Cullen, her life takes a thrilling and terrifying turn. With his porcelain skin, golden eyes, mesmerising voice, and supernatural gifts, Edward is both irresistible and impenetrable. Up until now, he has managed to keep his true identity hidden, but Bella is determined to uncover his dark secret. What Bella doesn’t realise is the closer she gets to him, the more she is putting herself and those around her at risk. And it might be too late to turn back… Deeply seductive and extraordinarily suspenseful, Twilight will have readers riveted right until the very last page is turned.”

I have read the Twilight series several times and I’m sure my readers know that I enjoy the series. But wow the audio book was just bad. For one the voices wasn’t my own so I had a very different Bella and Edward in my head suddenly.

Now I know that their relationship isn’t the best and that it is creepy at times. I know most twilight fans ignore all these facts and just enjoy the story. But this Audio Book made it impossible!

Please if you haven’t read Twilight, don’t listen to the audio book first, and if you haven’t listened to the Audio Book yet, but have read the book, stay away if you want to stay in the twilight bubble 🙂